I'm slowly but surely getting my shop back up and running. I have A TON of hats and headbands sitting around needing an owner to keep warm. They're too cute to be hiding in my closet! Go check it out.
Posted by Marie O. at 10:10 AM No comments:

How to Train Your Toddler?

So she pooped in the toilet tonight. She said "mommy potty," so we went in and put her on the toilet and she pooped. Pretty cool. Maybe I'll get lucky and she'll just potty train herself. Bad news is I still have about a thousand diapers in the closet....
Posted by Marie O. at 7:39 PM 3 comments: 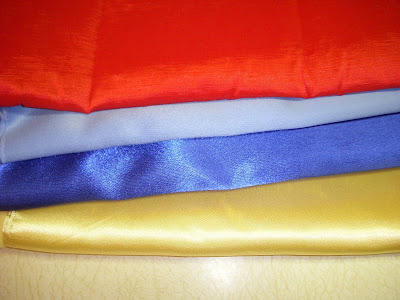 The Little Girl has recently discovered movies and she LOVES "No Wite." So naturally she needs a Snow White costume for Halloween.... I bit the bullet and bought fabric to make her a dress.
I've already run into some issues, but thats just how projects seem to work for me. I started putting it together last night and I'm really excited to see how it turns out. Wish me luck!
Posted by Marie O. at 11:34 AM 1 comment:

I said before that I was making my first "real quilt," which meant that it wouldnt not be made out of denim, and would be more complicated than sewing a bunch of squares together.

While making a quilt out of diamonds happens to be very similar to sewing together hundreds of square pieces of fabric... it was indeed more complicated. 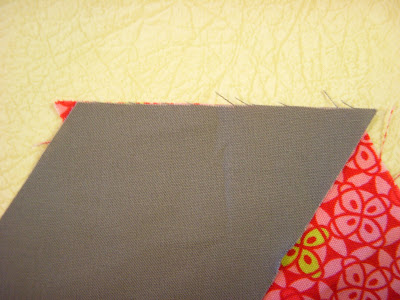 I quickly learned that I couldn't just line up the edges and sew them together. When I tried it, my diamonds ended up offset, the long edges of the chain of diamonds didn't match up. In order to get them to line up straight, I had to offset the diamonds when I sewed them into strips. I realize I could have made this step easier by strategically snipping off the points in just the right place, however, after cutting all those diamonds, I didn't want to go back and trim them up, and the points actually proved to be helpful when sewing my strips together. 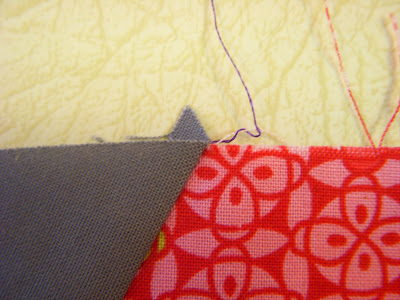 I ironed the seams toward the gray fabric, and the points poked out like so. 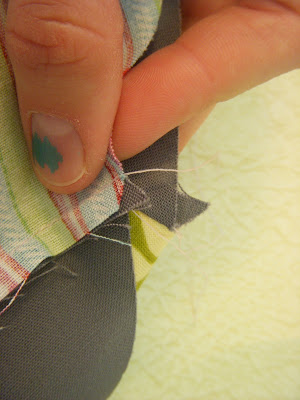 I figured out that if I matched the corners up.... 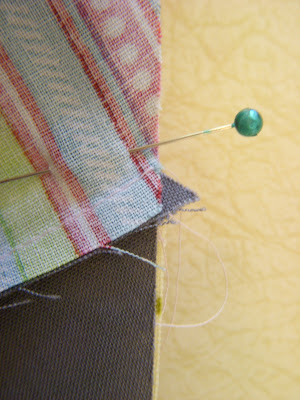 And pinned them together before I sewed the strips, the intersections on my diamonds matched up and looked so much cleaner. And it was much quicker than the guess and check (and then pick out a whole row) method I was using before.
I'm sure anyone with more sense than me would have done some reasearch or consulted an expert for advice. I, on the other hand, tend to do things the difficult way and just figure it out myself. Think I'll ever learn? 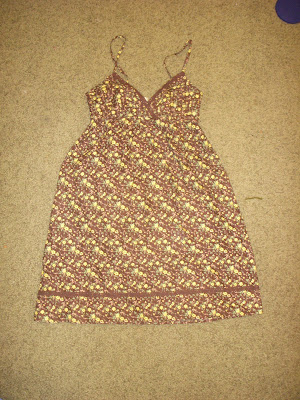 I bought this shirt/dress on my way out of Walmart a few months ago. It was on clearance for $3. It was cheap, and I was done shopping, so I didn't bother to try it on. When I got home, I discovered that it was too small. This week I finally found the time and courage to refashion it for The Little Girl. 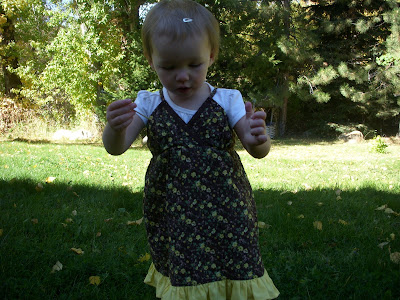 I cut about a foot off the bottom, took in the sides and the top, shortened the straps, and added a ruffle to make this cute little dress. 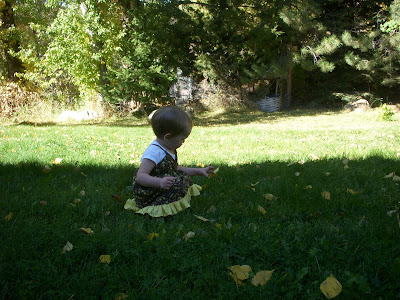 It's great for picking flowers, 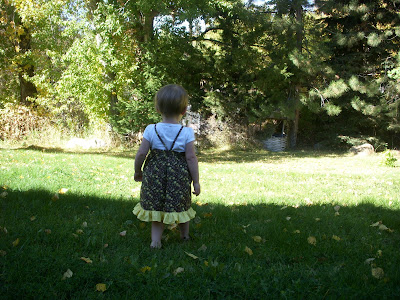 playing in the yard, 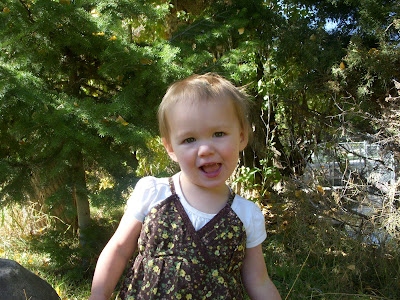 and posing for pictures! 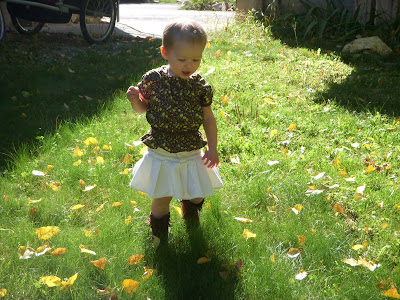 I used the fabric left over from the bottom of the dress to make this little top. 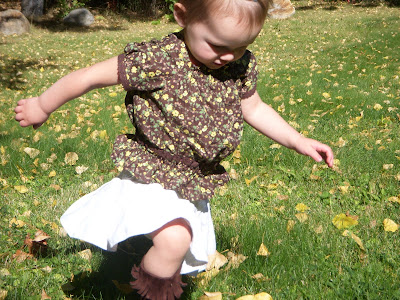 I had planned on posting step by step instructions, but I made a few mistakes, and had to do some very fussy cutting, and strategic pleating and gathering in order to get it to work out. It isn't what I picturing in my mind, and I know it shouldn't have been as difficult as I made it, but nevertheless, I like the way it turned out. 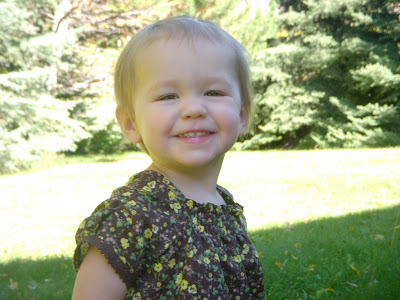 How cute are those little sleeves? 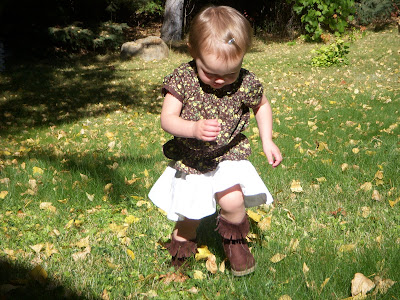 I also made her skirt from an old pair of my pants, and I love the way it turned out. I WILL put together a tutorial for it sometime in the future....

I'm entering this project into a crafting contest over at Sew Dang Cute. Go check it out! 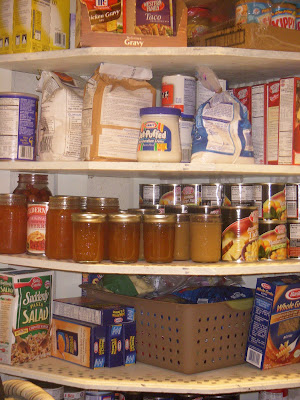 So I hit up the Case-Lot sale at Maceys, and came home to discover that I had nowhere to put my newly acquired foodstuffs. So... I had to clean out the shelves in our storage room (which I've been meaning to do for months, of course).
The whole room is now fairly clean and organized. With a place for everything and nowhere to put anything else! I have no idea where I'm going to put the 10 boxes of diapers that are still in the back of the Jeep....
Posted by Marie O. at 8:13 AM 1 comment: 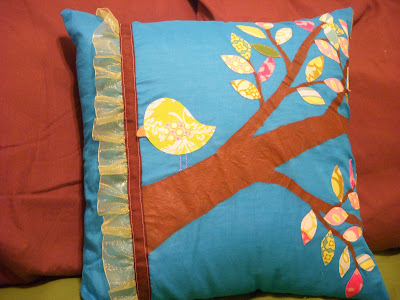 This pillow was inspired by this tutorial on UCreate. I didn't follow the tutorial much, but I did steal the idea. I used regular acrilic paint for the branches (works fine, but I think it would lay a little nicer if I hadn't applied it quite as thick), and the leaves are leftovers from this project, and I used the pattern from my little birdie magnets for the bird . I ironed them down and sewed around the edges. 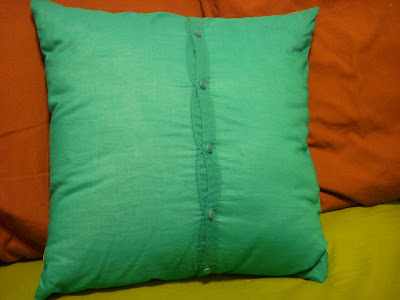 I cut up an XXL shirt that I bought super on sale at Old Navy. It worked out perfectly, because I didn't have to add any buttons or zippers or flaps... I just cut out a square from the front and the back and sewed them together.

It turned out a little too girly to get to live on the couch, but I found it a happy home in The Girl's Room, and she loves it. Now that she's closing in on 2 years, her room is almost decorated to my(I mean her...) liking!
Posted by Marie O. at 11:29 AM 2 comments: So the quilt top is finished (I couldn't get my picture to turn right-side-up). Actually, the back is also finished, and I've begun to quilt it. That part... not going so hot. We'll see how it turns out....
Posted by Marie O. at 7:48 PM 2 comments:

Diapers Coming Out My Ears

So we happened to be in Sam's Club yesterday,waiting for the car guys to balance our tires. We were wandering around killing time, when a woman with a cart FULL of boxes of diapers stopped us as she walked past. She said that Pampers Cruisers were on sale for $8. She also said "my kids don't even wear diapers anymore, but it's such a good price, I had to buy some, I'm sure someone I know can use them."

As we walked over to the diaper section, I tried to do the math in my head. It made absolutely no sense. I was pretty sure even the smallest package of Pampers costs more than $8 (wasn't positive, because I don't usually spring for name-brand diapers).

Sure enough there were 160 ct boxes of pampers diapers for $8 each. They originally cost $38. I still couldn't fathom it. I just stood there staring for a while, occasionally adding a box to my cart.

More and more women were beginning to congregate in the diaper aisle. They began to fill their shopping carts full of diapers, even if they didn't have a child to put inside all those diapers. One woman was wearing a blue tooth earpiece, calling all her friends, taking their diaper orders. Another woman, whose cart contained two children and two giant bags of tri-colored rotini began to fill her cart full of diapers. There were women everywhere, talking on the phone, loading their shopping carts full of diapers, it was near pandemonium.

A man walked by to tell us that there were Snickers and M&Ms on sale on the next aisle. Boxes of 24 ct Snickers for $2.48. THAT'S 10 CENTS A BAR. 45 oz boxes of M&Ms for 1.83. My heart began to race. Seriously. I felt so silly. But I got over it and grabbed a few boxes of Snickers and a couple bags of M&Ms.

I texted a friend and called my sister-in-law to see if they wanted me to get them some very cheap diapers and went back to grab a few more boxes. By then, the stack of diapers had been greatly diminished. Blue Tooth was filling her second cart, her poor kids trying to find room to sit in their cart with all those boxes. Tri-colored Rotini was also filling her second shopping cart. Another woman kicked and shoved one more box into the undercarriage of her cart. The aisle was packed with women on their cell phones talking a mile a minute grabbing boxes and boxes of diapers. I can only assume that their hearts were also racing from the adrenaline rush of snagging such a sweet deal. I snatched the last three boxes of size three diapers for my sister-in-law, still dumbfounded, hoping I was buying enough.

The checkout line was just as chaotic. Just imagine loading two shopping carts full of diapers onto that conveyor belt whilst being hopped up on adrenaline. I have to say I felt bad for the checkers as the crazy diaper-buying women came through the line.

We left the store with 12 boxes of diapers, 2 great big bags of M&Ms, and 5 boxes of snickers. That's right. I bought 120 Snickers bars yesterday. As we drove home, my heart was still racing. We speculated: Is this some sort of social experiment? Were we being video taped? And what's the catch?

Well... the Snickers are all nuts and caramel-no nougat (I might like them better that way), and the M&Ms are limited edition "team color" red and white (maybe from the super bowl?) but they still taste fine.

As for the diapers, I still haven't figured it out. But I'm feeling pretty fortunate. I bought 450 dollars worth of diapers for 96 bucks. And my Little Lady is sittin pretty in her fancy new name-brand diapers. Ka Chow. 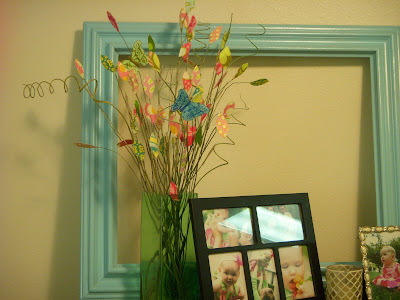 I made these fabric flowers for The Girl's room. They were made from scraps of fabric from another project and were inspired by this pattern from Amy Butler found here. 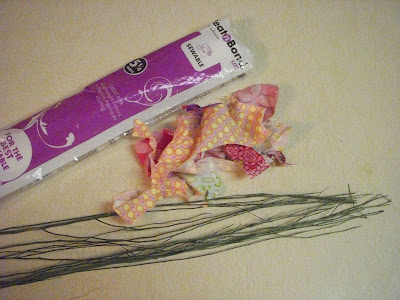 Want to make your own?
You will need:
Twigs, sticks, or fake flower stems (I bought mine at the Dollar Tree)
Scraps of Fabric
Heat-n-Bond fusible interfacing 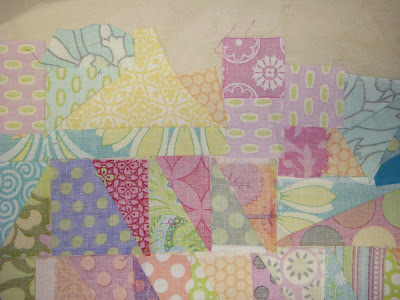 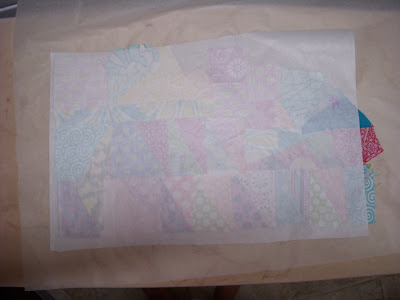 Then, I cut out a piece of interfacing to fit over the fabric scraps, and ironed it on according to the directions on the package. 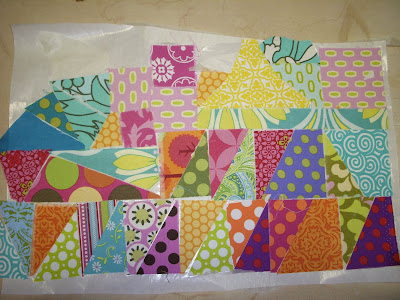 It looked like this when I was done. While the paper backing was still attached, I cut out leaf shapes from each little scrap. 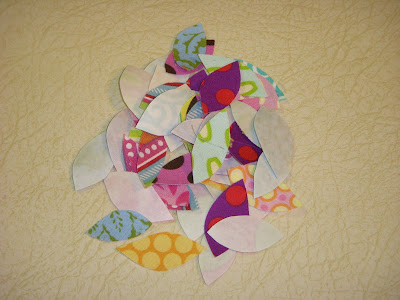 I ended up with this pile of leaves. 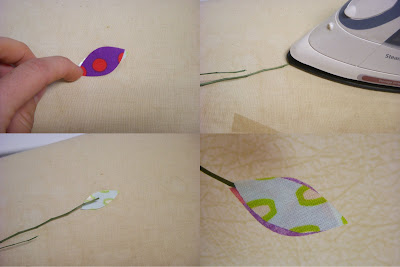 Next, I peeled the paper off each leaf, and sandwiched the end of the stem between two leaves. Then I ironed them together, and trimmed off the excess fabric sticking out (this was the time consuming part). 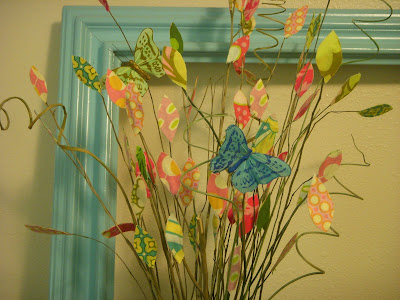 After much ironing and trimming this was the end result. Perfect for Her room! 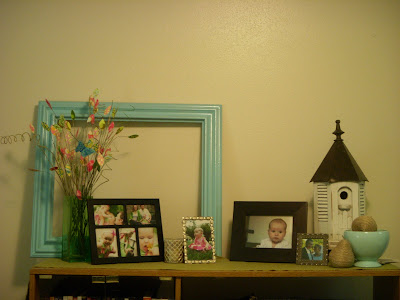 Although I made the "greenery" for The Girl's room, they were so fun and Springy that they've been on our entertainment center since Easter. 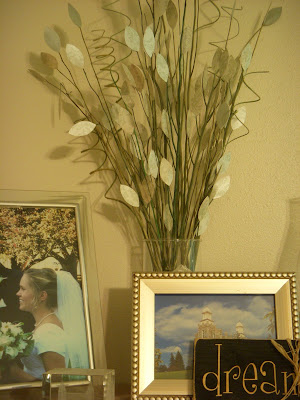 I love the way the fabric leaves turned out, but because I just eyeballed it when I cut them out, they were pretty irregular which made for a lot of trimming. I tried it again, this time using card stock, hot glue, and a stencil. It was fast and easy. Both methods turned out great. The fabric leaves are definitely my favorite and totally worth the time, but I don't know if I would be inclined to do it again.
Posted by Marie O. at 10:51 AM 4 comments: