And I'm having a sale in my shop this weekend.

Free shipping on all orders over $30. Use code: THANKS14

Starts Thursday at midnight and runs through Monday. 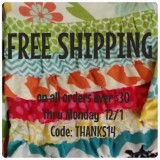 These bags just keep getting cuter! (If I do say so myself....) 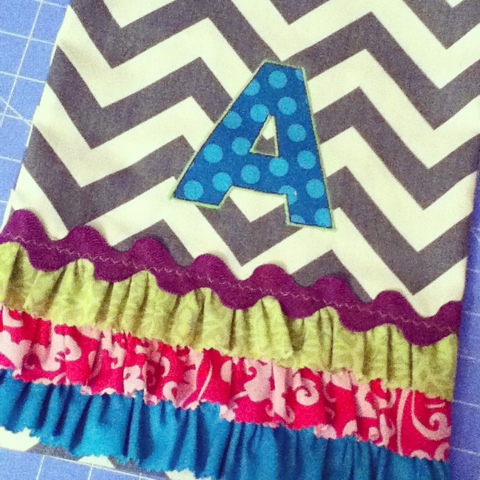 Few things are as lovely as a neatly folded, color-coded stack of pretty fabrics in bright colors. If only I had somewhere to display it :) 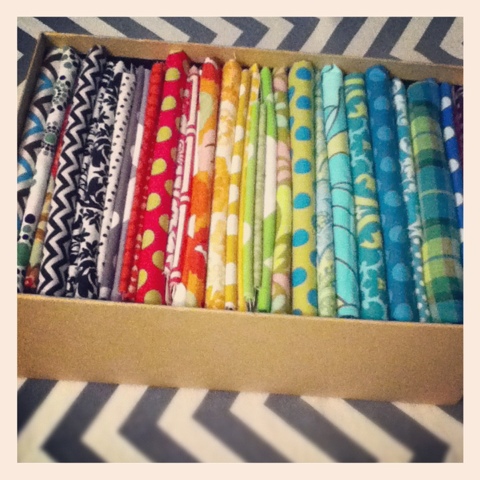 I used a photo box from Michaels, and folded the fabric around the divider cards found inside. (And then I cut out a bunch more from old cereal boxes).

I’ve been wanting to decorate for Halloween for WEEKS…. 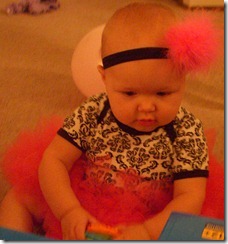 But I made myself wait (mostly) until this little girl’s birthday was over.  Our sweet baby girl turned one this week. I can’t believe how fast it’s gone by.  She is tough, and sweet, and SO FUNNY.  We love her to bits.

She wore a tutu and feather poof on her head all day long to celebrate.  I used this tutorial to make the tutu.  The elastic for her headband came from My Sunshine Supplies on Etsy. And I bought the tulle, feather clip and onesie from Hobby Lobby.

It was so fun to have a special little outfit for her special day. I could tell she knew something was up :).

And now that that day is over…. it’s time to decorate for Halloween!  I’ve got a few projects in the works, who knows how many I’ll actually post, but here’s one that’s quick, cheap, and easy (my favorite kind of craft). 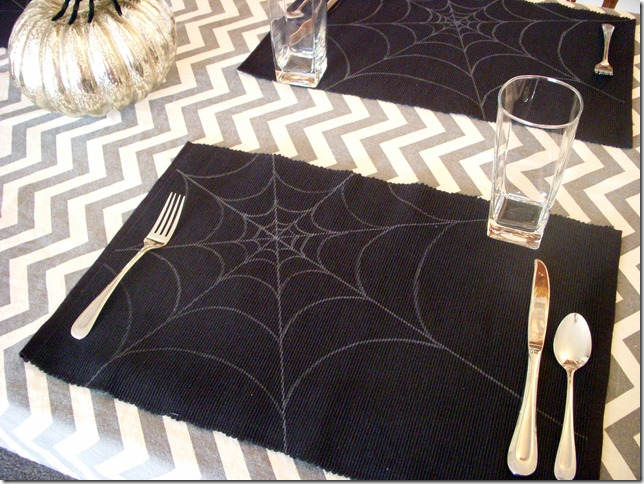 How fun are these?

I found these plain black placemats at The Christmas Tree Shop for 25 cents each! (they were originally 2.00 at Bed Bath and Beyond).

I knew I wanted to put some spider webs on them, but it took a few tries to find the best method.

So here it is! I’ve done all the dirty work for you, you lucky duck!

1- I used a white glittery paint pen I found at Michael's for about 3.50.  I really liked the results, but the pen dried up halfway through the 3rd placemat.  It worked great, but I wanted a cheaper alternative.

2- I used Martha Stewart paint with an Elmer's glue nozzle and just drew the webs on straight from the bottle.  …Except the nozzle didn’t fit the Martha Stewart paint bottles, so I had to pour it into an empty pain bottle first.  This method is definitely the cheapest, but I wasn’t a fan of the results.  It was hard to keep the paint even so that it didn't pool in spots, and the paint didn’t sink down into the fabric like I had hoped.  It just kind of sat on top.  Though I did try washing it, and the paint stayed on fine, I just didn’t like the way it looked.

3- Metallic silver sharpies.  About 2.50 for a pack of two at Wal-Mart. I got six placemats out of two pens. Add it all up and those six placemats come out to 66 cents a piece. I’ll take it.

I used the sharpie for this tutorial.  Definitely the way I’d go if you’re super cheap like me. 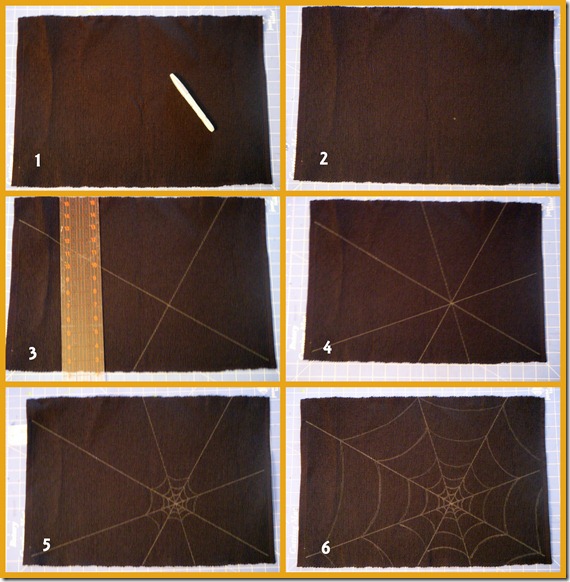 But be warned- there is a small amount of geometrical terminology in this tutorial… Just to make me sound smart :)

1- Gather your supplies. You’ll need a black placemat (I think it would also be really cute on a pillowcase…) a silver sharpie, and a straight edge.

2- Pick a spot for the center of your web.  See that tiny dot? I promise it’s there…. I like the webs sort of in the corner, but don’t go too far, it doesn’t look as good. Just trust me on this one.

3- Using your straight edge, draw 2 perpendicular lines (or almost perpendicular- wonky is fun, but also a little harder when doing the rest of the web) through that point.

4- Draw 2 more lines, bisecting (cutting in half) the four angles you’ve already created.  You should have 8 fairly equal slices of pie when it’s all said and done.

5- Starting near the center, connect the lines with little curvy lines, working your way outward, going around and around and around…. I vaguely remember doing this on my notebooks in grade school at Halloween time…. Ha. I even liked to decorate for Halloween when I was eight years old. ANYWAY- what I meant to say is: just do it, it’s not too complicated.

6- Keep going, spacing your lines further apart as you move out, until you hit the edges. That’s it.

7- Do 3 more and set your table (at 3 in the afternoon in September) just so you can take a picture: 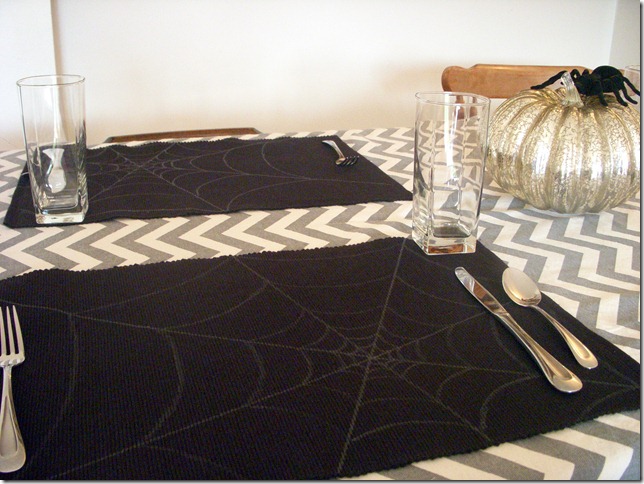 Fun huh?! Also- that sweet pumpkin… got it at TJ Maxx for ten bucks (thanks to Kate at Chic on a Shoestring for the heads up).  Score. 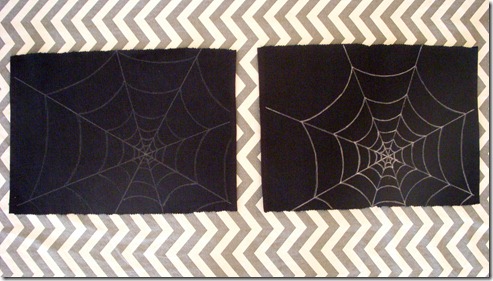 Enjoy! Let me know if you try it out!

Chic on a Shoestring

I found this handy little Pin the other day, and thought I'd give it a try. Because really. There have been rings in the toilet ever since we moved in, and I'm not about to stick my hand in there with a pumas stone like my mom suggested.

Bad news is: no magic. Floating the magic eraser in the toilet over night does not in fact magically erase those toilet rings.  When I went to check on it this morning it was lying at the bottom of the toilet.

I must confess: I flushed it. I don't imagine a magic eraser is the most flushable item around... and I was prepared to scoop it out with a plastic cup, had it still been floating on top.  Sticking my hand all the way down there? No thank you. So cross your fingers for me that we don't have any toilet issues. I'm sure worse things have been flushed down the toilet... (One time my little brother dumped a handful of pick-up-sticks in the toilet. It didn't end so well... Ha!).

I'm a big fan of magic erasers, but don't bother with the magic toilet ring cleaning- it's bogus. Too bad. I haven't tried any of the other magic uses from the link- let me know if you do!
Posted by Marie O. at 8:44 AM 2 comments: Links to this post


My sister-in-law took our pictures the day before we left to come back to PA.  It was super stressful for me to find clothes for all of us (ok just me really) but I’m so glad we found time to get some pictures.  Becca did an awesome job.  I love them! 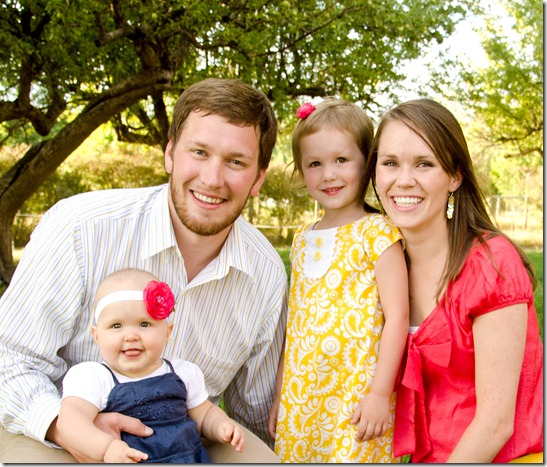 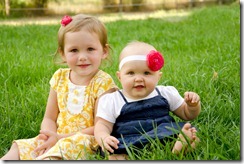 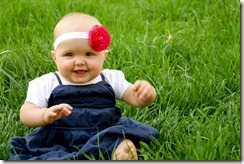 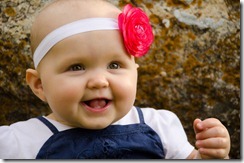 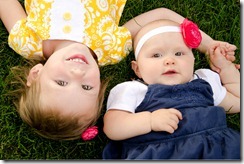 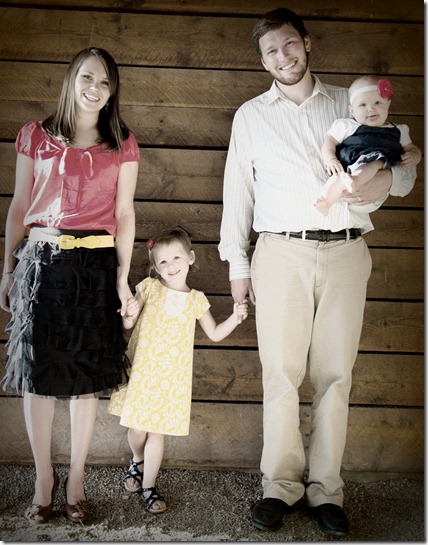 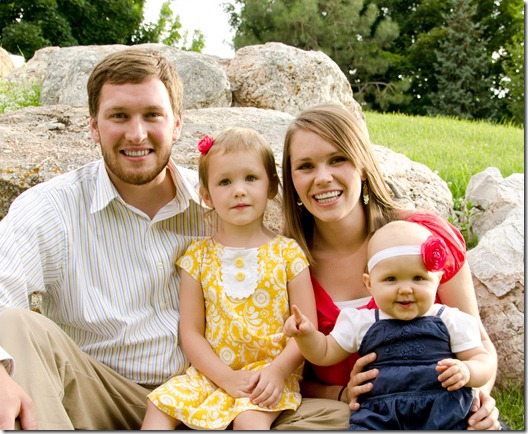 You can check our Becca's Facebook Page HERE!
Posted by Marie O. at 8:00 AM No comments: Links to this post

This was a great recipe. It's simple, fast (minus the slow cooker part. Ha!), doesn't heat up your house, and you probably have everything you need in your cabinets already.


I accidentally added the sour cream at the beginning, instead of the end, but it didn't seem to have any adverse effects. I served it over rice and black beans and added cheese, tomatoes, and green onions on top- haystack style. Love me some haystacks.

This one is definitely worth pinning.

***I tried this as a freezer meal... and was less impressed.  The chicken had that dry/crumbly frozen chicken texture, and the sauce also had a yucky different texture.  While handy, freezing this one just isn't worth it.  It's so easy in the first place, there's really no point.***
Posted by Marie O. at 7:47 AM No comments: Links to this post