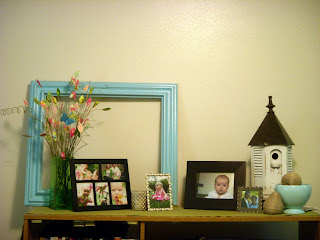 My mantle, I mean entertainment center, has been evolving a bit.  I finally got rid of the Christmas tree and brought back the fabric leaves, and I've been looking for something new to go in that blue bowl in the right corner.  The jute pears were a little to big to look good, and I'd like to use the Easter eggs I made last year elsewhere. 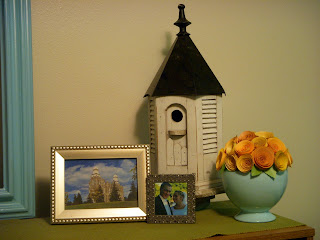 The bowl originally came home with a bouquet of flowers in it, and I wanted to make something similar, without buying a lot of (or any) supplies.  After scratching the fabric flower idea, I found this tutorial for paper flowers.  I made a couple dozen flowers out of different shades of yellow paper.  I followed the directions exactly, except I added a dab of hot glue to help the flowers keep the size and shape I wanted. They were easy to make, and and I made them all one evening sitting at the desk watching TV on the internet. Yay for me time! 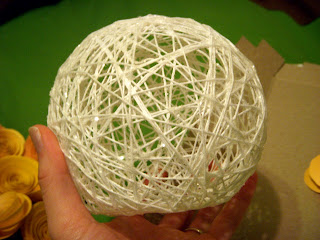 In the spirit of not buying things, I decided to use this ball made from crochet thread and glue that I had left over from a previous project.  It happened to fit perfectly inside my bowl.  If you don't already have one laying around, it would be much easier to go and buy a styrofoam ball or other round object. 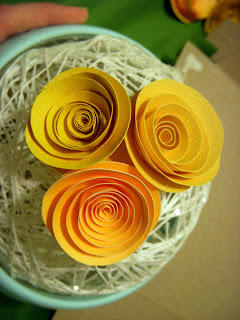 I began attaching the flowers with hot glue, starting at the top. 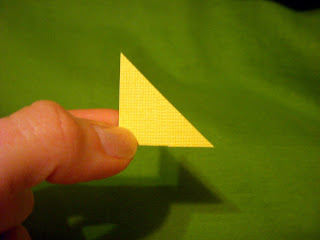 I used scraps left from making the flowers and tucked them in the spaces between flowers, so that the crochet thread wouldn't peak through the gaps. 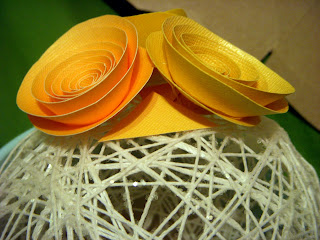 The scraps also ensured that light wouldn't shine through from one side of the ball to the other. 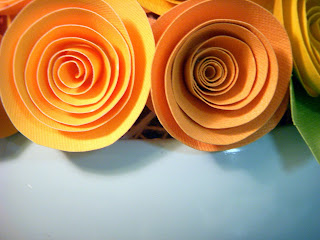 There were a few gaps around the bottom of the bouquet when I finished. 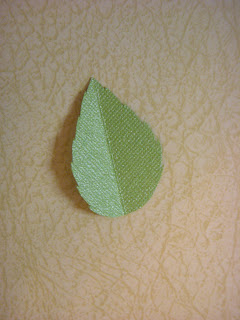 I cut out some leaves and folded them in half to tuck under the flowers and hide any remaining gaps... 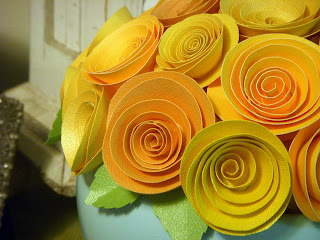 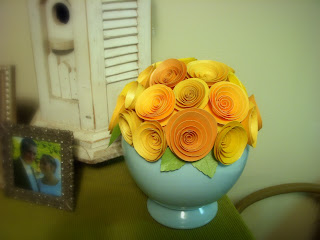 I have to say it turned out better than I had hoped. 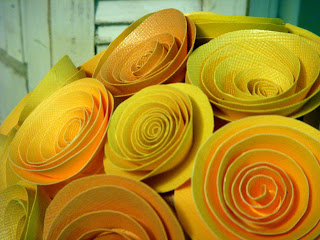 And the yellow flowers are so light and springy.  Too bad it's currently snowing outside....
I'm sharing this project at: 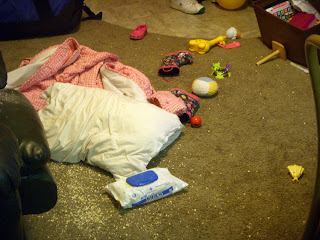 So this is what my house looks like, more often than not.  Yes, that's instant oatmeal all over the couch, floor, and even my pillow (which is in fact, laying on the floor).
A certain little two year old can be thanked for the oatmeal and toys scattered about, but I'm afraid only I can take credit for the pillow and blanket on the floor (mind you this picture was taken at 5:00 PM, oops!).
And it wouldn't be so bad if this were the worst of it.  If you could only see the heap of stuff that has collected on top of my out-of-order washing machine, or the thing that was growing inside our toilet bowl. Yick.
Motivation has not been one of my strong points.  And a poor little girl is often heard saying "mommy gid up," and "wake, mommy, wake."
I guess you could say I've been feeling a bit under the weather lately....  If "under the weather"  means so sick and tired that I don't feel like moving, eating, getting dressed, or even waking up.  And if the last three months count as "lately."
The good news is:
I've been feeling significantly better lately, crafty even :).   If only the sun would shine, I might even go out and exercise. HA.
My mom and brother came to visit last week and I had a baby shower at my house for an ex roommate, both of which provided a little external motivation to get my house in order.
AND.... 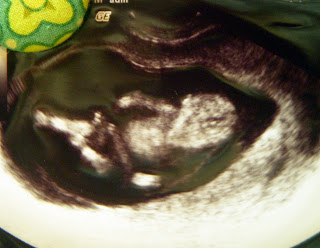 We're very excited to be expecting an addition to the family in September.  Pretty cool action shot of the little swimmer, don't you think?
Other good news is that I've managed to complete a project or two and I might even get around to sharing them!
Posted by Marie O. at 10:58 AM 3 comments:

We're getting SUPER festive around our house with some homemade Mint Oreos. 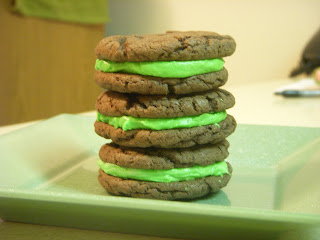 Sandwich frosting between two cookies and enjoy!
Posted by Marie O. at 11:19 AM 2 comments: